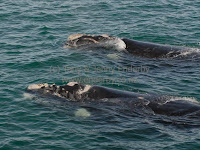 Early settlers living around Wellington's Port Nicholson complained of being kept awake at night by whales. That problem was solved by whalers who quickly reduced southern right whale populations around New Zealand.
Early whalers found them in abundance – some estimates put the coastal population at around 30,000 before whaling. Right whales were slow, easy to harpoon and floated after they were killed, making it easy to tow them ashore and cut them up. Dozens of shore-based whaling stations around New Zealand quickly reduced populations of the “right” whale to hunt.
They are still classed as highly endangered although recovering populations have re-established around the sub-Antarctic Auckland Islands and also Campbell Island. Another population has begun to form in southern Fiordland.
While occasional southern right whales have been recorded from all around New Zealand they are far from common. Easily identified by the lack of a dorsal fin and a mass of barnacle-like growths around the head and mouth known as calliosities, scientists are hoping for people to report their sightings.
A recent report by Department of Conservation scientists, found that whales from the Auckland Islands population are beginning to be seen around the New Zealand coastline.
New Zealand's marine mammal regulations are quite strict and boats are not permitted within 50 metres of a whale. Boats are also required to travel at five knots in the vicinity of whales. Marks across the back of the smaller whale off Tutukaka suggest that at least one boatie didn't heed safety regulations.
Another southern right whale off Pukerua Bay near Wellington had someone climb onto its back. Obviously that person had never seen a right whale deal with an orca by hitting it with its tail. That outcome by a person lacking any common sense could have had a tragic outcome had the whale reacted.
Right whales were given protection in 1935 but most populations were gone by then. Only the South Atlantic Ocean population that winters along the Argentine coast was not reduced to less than 1% of their original numbers.
Posted by Tony and Jenny Enderby at 6:34 PM